Public transport at 5:30am

What do you do when the early morning taxi you call does not turn up ? How do you get to the train on time?

I thought of the metro and asked A to drop me to the station. At the security check a well meaning sardar told me that the train would only come in by 6.

I walked down to the road and waited. A car pulled up. The guy asked me where I wanted to go. Still recovering from the question I answered like have done for 3 decades - Nai Dilli Railway Station, Ajmeri Gate.

He was not going there but could drop me till AIIMS.

How much would he charge?

10 bucks ? Are you kidding me? I jumped in. I thought I had a chance to catch the train. There was an hour left.

I have driven on that road from the MG Road to CP many times. At best I though he would take half an hour to get to AIIMS. The minute he floored the accelerator, I realized that this was going to be a scary ride. My brother, if he was with me, would have never ever called me a bad driver after that.

This guy stopped the car next near the AIIMS crossing after 10 minutes. I lost count of how many traffic lights we jumped and what rules he broke.

The remaining part of the journey was in an auto I shared with two other men. Since I was still shaken from the car ride, I barely registered reaching Ajmeri Gate 15 minutes later.

I paid 90 bucks for 25 minute ride that the radio taxi would have charged 600 at least. And this was faster than than the metro.

I hope the taxi doesn't turn up again sometime in the future.

The city and the suburb

Yesterday on the Guragon-Delhi highway we spotted a landmark - the 32nd milestone. This was popular hang out joint with school and college kids till the 90's. It was also outside the city. Really far. So far that no buses went there. You had to borrow car. Or have a friend who could borrow a car.

Twenty years ago we had a clear definition of where the city ended. In the case of Delhi it was the Mehrauli towards the south. No one really knew what lay beyond. Maybe farmland. Or jungles.

Even with the coming up of Gurgaon we knew that there was a vast area in between Delhi and the new township. Gurgaon was a suburb. It even had a colony called South City. Delhi was the City. And there was jungle in between.

However with more and more villages getting urbanized on the Mehrauli Guragoan road and Gurgaon sprouting skyscrapers right till the border, this definition has become blurred. If one looks down when one is coming to land at Delhi airport one can see that urban dwellings are often continous or at least there is similar mix of houses and trees similar to other parts of Delhi.

One cannot really say anymore Here is where the city ends.

And it is not really that the city is expanding. It is merging with the suburb. One can see this on the metro. As one travels along the Gurgaon line (or NOIDA) one does not think for a moment that one is crossing into another state or city anymore.

Twenty years ago we would say - Oh you are living in Gurgaon ? Today one doesn't really think about it as a place that is far away.

The funny thing is that it takes longer to get there today compared to then.
Posted by Unknown at 6:13 PM 25 comments:

Now we can go to the markets on Sunday...

...Monday,Tuesday and all the other days ending with Y.

I had written somewhen about how the metro has revived CP. A lot of people now drop in to shop and walk around the area - something that was unimaginable five years ago.

Now with the opening of the Gurgaon and Badarpur lines many other markets are within reach - Khan market, Lajpat Nagar and Dilli Haat. The latter has already seen a huge increase in footfalls within a month of the metro line being launched.

One of the problems in markets was parking space and people would avoid going to CP for this reason. Many prefer a tradition market like Karol Bagh or Lajpat Nagar but were often dissuaded by the traffic on the roads. But with the metro this is no longer an issue. Also since the trains run regulary and on time (unlike buses) one can choose when to go and shop.

Add the traffic restrictions around the Commonwealth Games this a good time to hop onto the metro. No more blue lanes to avoid and the shock of watching traffic cops actually do their job :)
Posted by Unknown at 11:03 AM 3 comments: 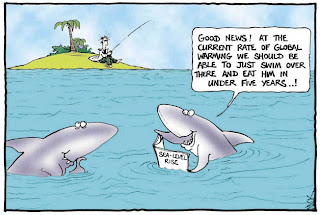 No. Am not saying that the earth has been warming up for 35 years.

Someone used this term in a research paper in 1975. And we have been thinking, talking and debating ever since. Most of us still disagree about the extent to which man is causing climate change and many of us concede that as an individual we cannot make a change.

If we look at our day to day activities, I am sure that we can identify one thing we could change every month that would have a positive impact on the environment.

In unrelated news the Gurgaon Metro line will open in September. Maybe we can ditch our cars each time we have to go mall shopping :)


cartoon: www.zunal.com
Posted by Unknown at 1:27 PM No comments:

People who came to Delhi

A friend of mine had once remarked that Delhi is run by three or four groups and the aim should be to quickly fit into one of them. He was talking about social success. Traveling on the metro one can see faces of people from different age groups and communities who have made this city their home.

This set me thinking - much like the 7 cities of Delhi, several groups people have come to this city in waves and this makes living here an interesting experience.

I can think of some :

1. The pre 1911ers - These are people who lived in the villages - Mehrauli, Humayunpur, Chirag Dilli, Nizamuddin and also in Purani Dilli. Mostly they were separated from each other - each community managing their own affairs.

2. The Capital Magnets - New Delhi's foundation stone was laid in 1911 and it took twenty years to build it. During this time many groups moved in - government officials, contractors and construction workers. The first settled in civil lines, they second took up housing in the expanding new city while the third went to places like Karol Bagh.

3. Partition's Children - In the first decade of Independence the population of the city doubled with refugees coming in from Pakistan. They have become the most vocal and visible group. They gave the city its familiar Punjabi character distinct from the predominant groups of that time - baniyas, muslims, rajputs and jats. They started the roadside - patri - shops selling items and cheap rates to other refugees who could not afford to buy from the shops in Connaught Place. We can see offshoots of these roadside shops in Lajpat Nagar and Sarojini Nagar.

4. Sarkari babus - we needed them to run the the new independent country. Areas like Lodi Colony and R K Puram were developed to create housing colonies for these families.

5. B & B - biharis and later the bangladeshis who provide the work force to the city now. Most of the city after the 80's have been built by the former and the houses are run today by the later.

Of course in the last decade we have people coming in to work in the IT industry. And students have been coming to the city various colleges for decades. Just that they are now coming from remote corners of the country.

Any other faces that you can recognize in the metro ?
Posted by Unknown at 11:10 AM 1 comment:

Of course the numbers are very small as of now but economist Paul Krugman has chosen to highlight this as the decline of a nation. He says:

We’re told that we have no choice, that basic government functions — essential services that have been provided for generations — are no longer affordable.

Of course, the reason why some roads have been turned to gravel in the US is that they are no longer in use. Highways provide better rides and connectivity and these back roads that were important at some time are no longer used regularly.

Still for most of us in India this system would NOT come as surprise. Here we have been turning paved roads into gravel every year. That way contractors and politicians make money regularly. And they can claim that they have created thousands of jobs each year.

Wonder what Krugman would say about our system?