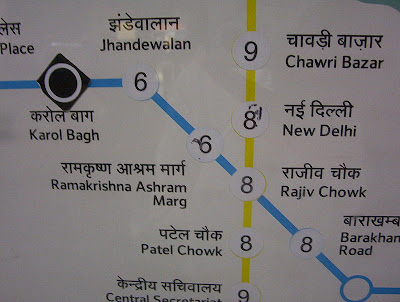 Walking thru Karol Bagh today, one can see a new set of tourists coming here. I am not talking about the Russians (15 years back they discovered K Bags as a haven for cheap clothes and ran a thriving export business). Most of the new ones come here to soak in Delhi's history.

They find it cheaper to stay here and travel by the metro. Ideally located (near CP and old Delhi) with the station and airport half-hour away.

Being close to the centre of the city, K Bags has always attracted different communities throughout the last century. Apparently it got its name from the numerous Christians who lived there and would take out processions on the street singing “Carols”. One locality - Regarhpura, houses members of the Reghar tribe, who were employed by the British as labourers in the construction of New Delhi.

After partition many of the refugees moved here. Later Bengalis, Tamilians and Malayalis have settled in droves with specialized shops catering to "Madrasis". Gaffar Market became an important place where we could buy all kinds of “smuggled” electronic goods and "imported" shoes.

By the late 90’s the market was a crowded urban jungle. Karol Bagh had become a concept.

Here is a letter by one Mr. Nalin Rai that I found (such are the joys of Internet) in a back issue of Down to Earth, where Karol Bagh is being evoked to explain out of control urbanization:

The article ‘High altitude sickness’ (Down To Earth, Vol 13, No 9, September 30, 2004) highlights the systematic rape of hills under the garb of tourism. Hill towns anywhere in the country have become an extension of the popular Karol Bagh market of New Delhi, both in the literal and metaphorical sense.

Now I hear that according to Master Plan 2021(???), the use of rickshaws is being planned to make Karol Bagh free of motorized traffic . Great news. One will walk safer in the market.

But I would like to warn you. Free of motorized traffic does not mean pedestrian friendly. Not in Karol Bagh. The place might become a live action video game with hawkers laying siege to the roads too - as it happens on Mondays each week.
Posted by Unknown at 9:30 PM

Hi I am Nalin rai whose letter u have posted. IN fact this is borne out of my experience in living in Shimla and in Delhi

''Now I hear that according to Master Plan 2021(???), the use of rickshaws is being planned to make Karol Bagh free of motorized traffic . Great news. One will walk safer in the market.''

well..i would like to know that from where did u get to know about this information?? did u read it in master plan only?? plz send me the link of the same.
(im an architecture student and studying Karol Bagh as my project study...any kind of information/data would surely help..)
thanks.

nd yes..what made u relate this karol bagh with k-bags or christmas carols?? is it true?